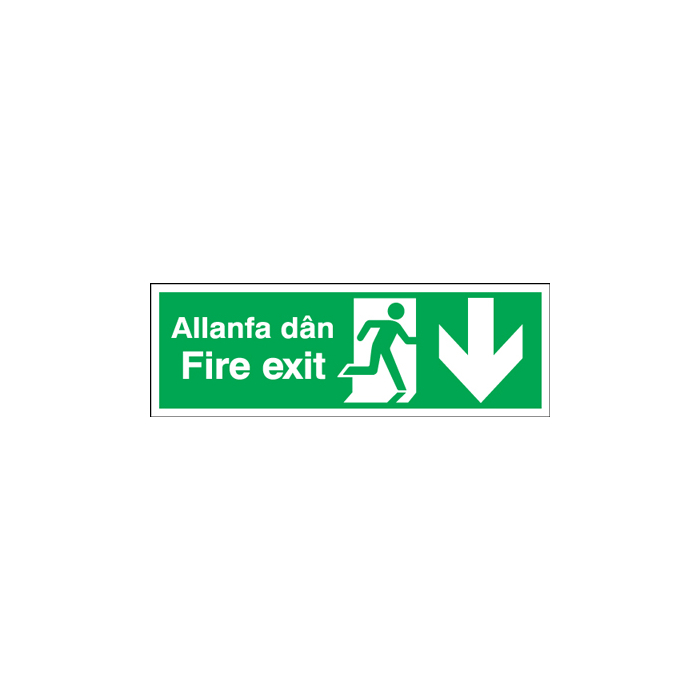 Very important consideration must be given in building which are also occupied by Polish language speakers and providing guidance for them to escape from the property in the event of an emergency such as mounting Fire exit arrow down signs in Polish speaking language which feature the words "fire exit" in the Polish language. In building where fire exit signs are needed to be in aluminium material for longevity the aluminium fire exit arrow down signs are the ideal choice, made from 0.9mm anodised aluminium the arrow down aluminium fire exit signs are pre-drilled for ease of installation either above fire exits or above stairwells in common areas of the building.

This information provides further guidance on the general principles that apply to escape routes and provides examples of typical escape route solutions for a range of common building layouts. The guidance is based on premises of normal risk so if your premises (or part of your premises) are higher (or lower) risk you should adapt the solution accordingly.

In order to apply the guidance, you need to understand that in any fire situation, the time that people have to escape before they could become affected by the fire is limited. Providing them with sufficient time usually means that as well as having appropriate way of detecting and giving warning in case of fire, the distance that people have to travel to make their escape to a place of reasonable or total safety must be restricted.

The travel distances which are usually appropriate for this purpose (and are suggested later in this section) vary according to the level of risk in the premises (or part of them). To check your escape routes will need to form a judgement about the level of risk that people may be at after you have taken other reduction (preventative and protective) measures.

In premises where there is a likelihood of a fire starting and spreading quickly (or a fire could start and grow without being quickly detected and warning given) and affect the escape routes before people are able to use them, then the risk should normally be regarded at "higher". Such premises could include those where significant quantities of flammable materials are used or stored; ready sources of ignition are present, e.g. heat producing machinery and processes; premises where significant numbers of people present are likely to move slowly or be unable to move without assistance; and premises where the construction provides hidden voids or flues through which a fire could quickly spread.

In premises where there is a low occupancy level and all the occupants are able bodied and capable of using the means of escape without assistance; very little chance of a fire; few if any highly combustible or flammable materials or other fuels for a fire; fire cannot spread quickly; and will be quickly detected so people will quickly know that a fire has occurred and can make their escape, then the risk can usually be regarded as "lower".

In most cases however, the risk will usually be "normal". The travel distances suggested are not hard and fast rules and should be applied with a degree of flexibility according to the circumstances. For example, in premises where the risk might otherwise be considered "normal" but where there are a significant number of people who move slowly or may need assistance to evacuate, it would usually be appropriate to consider this a "higher risk". However, where other measures are in place to mitigate this, such as the availability of extra assistance and this has been planned for in your emergency plan, it may be that the risk level can be regarded as "normal to higher".

Equally, in premises where the risk category would otherwise be "lower" but for the fact that a small number of occupants may move slowly or need assistance, it may be appropriate to categorise the risk as "normal" in these circumstances.

You should ensure that your escape routes are;

In multi-occupied premises, escape routes should normally be independent of other occupiers, i.e. people should not have to go through another occupier`s premises as the route may be secured or obstructed. Where this is not possible, then robust legal agreements should be in place to ensure their availability at all times.

All doors on escape routes should open in the direction of escape and ideally be fitted with a safety vision panel. This is particularly important if more than 60 people use them or they provide an exit from an area of high fire risk.

At least two exits should be provided if a room/area is to be occupied by more than 60 persons. This number of 60 can be varied in proportion to the risk; for a lower risk there can be a slight increase, for a higher risk, lower numbers of persons should be allowed.

Movement of persons up or down a group of not less than three steps will be so obvious to those following that they will be prepared for the change in level, but movement up or down one step is not so readily observed and may easily lead to a fall. Wherever practical, differences of level in corridors, passages and lobbies should be overcome by the provision of inclines or ramps of gradients not exceeding 1 in 12 or steps not having less than three risers in any flight. Corridors and passages should be level for a distance of 1.5 metres in each direction from any steps.

Any mirrors situated in escape routes should be sited so that persons escaping from a fire will not be thrown into confusion by any reflecting image of the route they are using, or be misled as to the direction they should take to reach fire exits. While not normally acceptable, the use of ladders, floor hatches, wall hatches or window exits may be suitable for small numbers of able-bodied, trained staff in exceptional circumstances.